Last week I had the privilege of chaperoning my daughters 6th grade retreat at Camp Minikani a YMCA camp located North West of Milwaukee.  It was the first time I really had the opportunity to observe my daughter with her peer group, outside of sports teams, something I’ve always been curious about.  What I observed was inspiring and qualities I always knew my daughter possessed but again had not experienced with her.

My daughter Claire is among a small group (at least in her grade level) of young leaders in waiting.  While I observed many of her peers’ leadership behaviors, over the course of the two-day retreat, I of course was most interested in how Claire demonstrated the qualities of a great leader.

Even before we arrived, she studied the packing list and was packed and ready to go three days before hand, demonstrating that daily efforts really connect to larger goals.  Once she arrived and determined her group and cabin, she led them through a review of the events over the next few days.

While her peers looked to her for encouragement, direction, and feedback, she never saw herself as their leader, instead she integrated with them and humbly accepted the same from her peers.  Claire knew her peers strengths and weaknesses and helped to leverage them in turn growing their confidence in their own abilities.  This was evidenced during the high-wire walk.  A fellow peer (boy) was terrified to climb the pole and walk across the cable.  Knowing this she demonstrated to him how to do it and then sat down next to him, empathetic, talked to him encouraging him to overcome his fear.  And, he did.  Claire, as do great leaders, saw her peers are people too and while several other of her peers cajoled or laughed she encouraged. 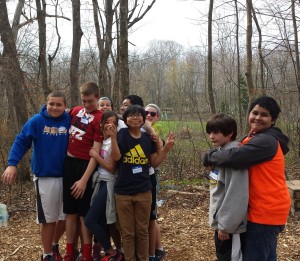 Next, during the team building activities with her group I observed Claire’s willingness to be accountable and responsible whenever they did something wrong.  Instead of blaming individual team members for stepping on the wrong log or falling in the lava pit (which was clearly evident), she would ask how can we improve as a group.  Taking responsibility for the groups failures demonstrated the leadership ability to put her self interests aside and help the group succeed together rather than separately as individuals. 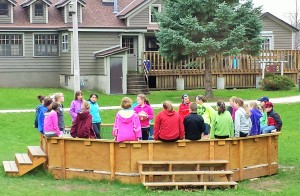 Claire continued demonstrating her leadership qualities, even during their free time.  During a game called Ga-Ga Ball, a game she just learned to play from a fellow classmate, took it upon herself to teach other classmates how to play the game.  Great leaders teach others, motivating and inspiring them to be empowered.  Claire could have been immature like many of the girls and boys at this age, but instead confidently stood in the middle of her peers and taught the entire group to play the game.

There are so many other examples of how she demonstrated the qualities of a great leader such as the courage to stand alone, listening, problem solving, patience, this post could go on forever.  However, the wonderful thing about all of this and what I observed was that Claire has never gone through formal leadership development training or classes.  This is in alignment with my belief that we are all leaders in waiting and that we all have leadership qualities inherent to us, we just need the right people to help maximize that potential in our lives.

I don’t take full credit for Claire’s story.  While I am sure she has picked up some things from me, she has a wonderful mother who has been a great leader, teachers who have demonstrated great leadership qualities, sports coaches who have given her tough feedback, and her own faith in God.